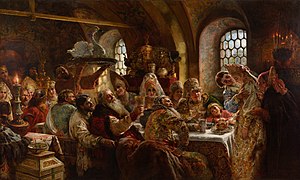 A traditional Russian wedding can last between two days and one week. The celebration involves dancing, singing, toasting, and banqueting. The best man and maid of honor are called Witnesses or Свидетели ( svideteli) in Russian. [1] The ceremony and the ring exchange take place on the first day of the wedding. Despite their seemingly unique matrimonial ceremonies, Russian weddings have adopted some western traditions, including incorporating bridesmaids into the wedding party.

A friend of the bride, who is already married, places the first earring on the bride-to-be. the second must be placed there by the husband of the friend.

Once the groom arrives at the bride’s home, he must pay a ransom for the bride, a term known in Russian as "vykup nevesty." This event is meant to be comical and entertaining. First, the groom brings an offering (often money or jewelry) for the bride. At this point, the bride’s parents bring out a woman or man (the latter for amusement) who is not the actual bride but is dressed up like one covered in a veil, so the groom cannot see his or her face. When the groom realizes that it is not his bride, he asks for his love, but the bride’s family will demand a more significant ransom to be paid. Upon satisfaction with the ransom given, the bride’s family gives away the bride to the groom.

The bride and groom have the option to have a traditional ceremony in a church. In Russian, it is called the venchanie. The wedding ceremony takes place in a church and is divided into two parts: the Betrothal and the Crowning. The service traditionally takes place in the morning after the celebration of the Divine Liturgy, during which the wedding rings were blessed by being placed on the Holy Table (altar).

While the betrothal used to be blessed at the beginning of the engagement, it is now commonly done at the same ceremony as the wedding itself.

The bride and groom stand inside the entrance of the church and the priest blesses them and gives them lighted candles which they will hold throughout the ceremony. The deacon leads an ektenia (litany) with special petitions for the couple. The priest then says two brief prayers for the couple and the rings are blessed and placed on the couple’s right hand.

The priest then says a prayer blessing the couple’s betrothal which mentions instances in the Bible where rings are used and relates those instances to the betrothal.

In the Eastern Orthodox Church, Holy Matrimony is considered a Sacred Mystery and the sign of the marriage is not the exchange of rings (that takes place at the betrothal) but rather the placing of crowns on the heads of the bride and groom. For this reason, the ceremony of the wedding is referred to as the Crowning.

The priest leads the couple into the center of the church where they come to stand on a piece of new, rose-colored fabric, symbolizing their entry into a new life. The bride and groom each publicly professes that they are marrying of their own free will and that they have not promised themselves to another.

After an ektenia and several longer prayers, the priest places crowns on the heads of the bride and the groom. These are usually held over their heads by members of the wedding party. Following that are readings from the Epistle and Gospel, ektenias, brief prayers and the sharing of a "common cup" of wine by the bride and groom.

A procession then takes place during which the priest wraps his epitrachelion (stole) around the joined hands of the bride and groom and leads them (followed by their attendants who are holding the crowns) three times around an analogion on which the Gospel Book has been placed. This procession symbolizes the pilgrimage of their wedded life together.

It used to be the custom that the bride and groom would wear their wedding crowns for eight days, but now the removal of the crowns is customarily done at the end of the service. The priest says benedictions for the bride and groom and then the dismissal takes place.

Following the traditional ceremony, the couple must have a civil ceremony called rospis v zagse. This ceremony takes place at the department of public services, formally known as ZAGS. At ZAGS the couple is greeted by family members with bread and salt. The ceremony ranges from 15 to 30 minutes and during this time the rings are exchanged and the couple is pronounced husband and wife.

During the civil ceremony, the parents offer the married couple two crystal glasses, which they are asked to break. The more pieces or shards of glass they create, the greater the number of years of happiness they will spend together.

It is also customary for the married couple to release either balloons or, more preferred, two white doves to symbolize their love and partnership which is written in the sky for all to see. The bride also releases another balloon with her maiden name written on it. 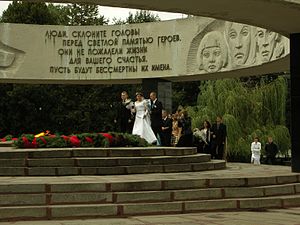 Following the civil ceremony, the newlyweds and their witnesses travel around the city in a limousine and tour many historical sites. There are times when close friends join them as well. This presents the primary opportunity for the majority of the wedding photographs that are taken at varying historical places around the town or city. Bride and groom both revolve around the city and prove that our coming city will be like

After touring the city for several hours, the couple meets the guests for the reception.

A Comprehensive Russian Grammar — A great reference on Russian grammar.

Russian Learners’ Dictionary: 10,000 Russian Words in Frequency Order — A simple but powerful concept. Expand your vocabulary by learning the most used words first.

If you happen to find love whilst studying in Russia, you may like to know what is in store for you on your special day. Here are some Russian wedding traditions.

Historically, the engagement was the most important part of the ceremony. The parents of the bride and groom would sit down together and agree a date for the wedding. Nowadays, however, this has become rare and standard proposals are more commonplace.

A new concept in Russian weddings, which has been borrowed from western countries, is the exchange of wedding rings. The small difference is the hand on which the ring is worn, as in Russia the wedding rings are worn on the right hand rather than the left.

Stealing the Bride and the Ransom

Russian weddings also have some comical traditions! Prior to the ceremony, the bride’s family or friends pretend to steal her from the groom and he must pay a ransom for her return. Sometimes after paying the “ransom”, the family will bring out another girl dressed as the bride, and the groom must pay an ever bigger “ransom” for the real bride. After this, the couple make their way to the wedding ceremony. The bride may be stolen at other times during the wedding too, so the groom must be on the look out!

Often Russian couples go to the registry office (ZAGS). This service is very similar to a Western European service in a registry office. However, if the couple choose to also have a service in a Russian Orthodox church, there are some differences to a service in a Catholic or Protestant church. There are no church pews so guests must stand. The ceremony can last up to 2 hours, however, usually couples opt for a shortened version of the ceremony. In the Orthodox church a sign of marriage is the placing of crowns on the couples’ heads. The question, “Does anyone know of a reason why these two cannot marry?”, which is a common feature in a Western European wedding is not asked.

After the formal ceremony has taken place the bride and groom, accompanied by some of their closest friends, drive to historic sites in their city to take pictures and share a few glasses of champagne. In Moscow the most popular sites to visit include Red Square, the Tomb of the Unknown Soldier and Victory Park, so don’t be surprised to see some brides among the tourists.

Gorko is another common tradition you may observe during the festivities. During the first toast, someone will shout “Gorko”, meaning bitter, to describe the champagne. All of the guests follow and together shout “Gorko”. In order to sweeten the taste, the bride and groom must kiss for as long as possible and the guests count while they kiss. If the kiss does not last long enough for the guests liking (a common occurrence!), they may insist that they do it again and repeat the routine.

Russian wedding celebrations don’t end after the wedding night, there is still another day to go! This is usually held where the couple plan to live, such as the groom’s home. There is less structure to the second day of the wedding, but it usually includes many toasts. There is often someone designated to arrange the entertainment, called a Tamada.